Power-up and open FUSION
Finding the objects on the microscope

A.  Choose an objective:  On the touchscreen display panel of the Leica DMi8 microscope, push ‘Magnification’ icon (1 in Figure 1) to open the control panel. 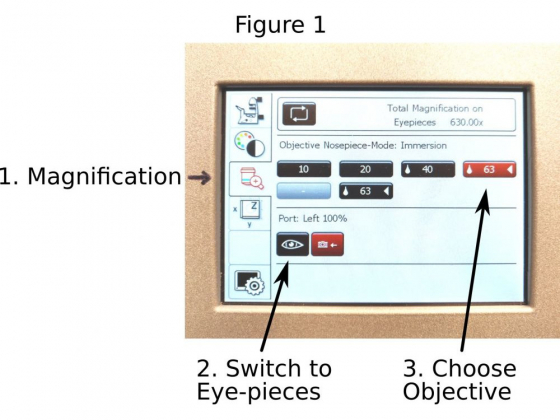 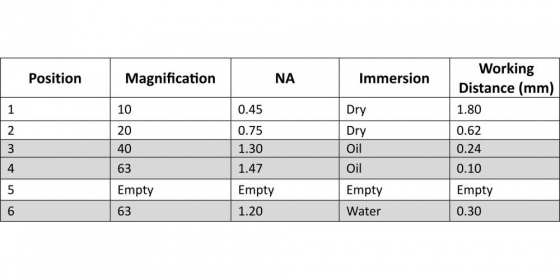 B.  Loading a sample:  Put a sample on the sample adapter. If the objective position is high, lower it down first to avoid scratching of it when loading or moving the sample. Remember, imaging through a #1.5 glass coverglass will ensure you the best image quality. 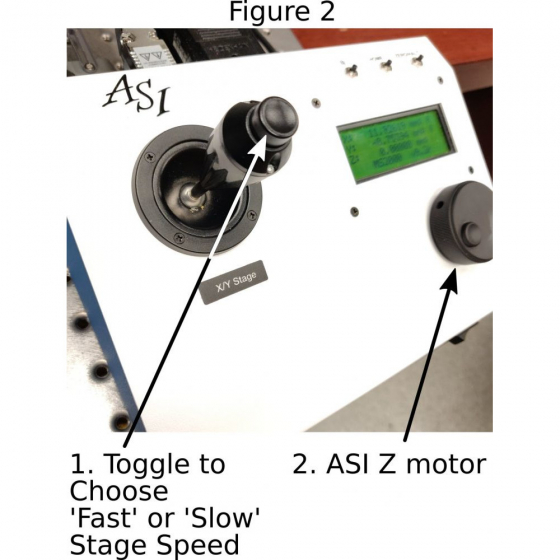 D.  Using the lights attached to the microscope:  Two LED light controllers are attached to the microscope: one (pE-100) is for viewing samples with bright-field light; the other (pE-300) is for fluorescent samples (three LED lights are available for blue, green, and red fluorescent channels). The two controllers have push-button switches to turn the lights ON or OFF. Light intensity is also adjustable.

E.  Bright field or fluorescence:  Push the ‘Contrast Methods’ icon (1 in Figure 3) on the touchscreen to open the page. BF, Ph, and DIC are for bright-field illumination; For best bright-field contrast, you also need to manually select a filter in the condenser to match the objective used; Selections for the DAPI, GFP, and TxRed filter cubes are for blue, green, and red fluorescent channels separately. 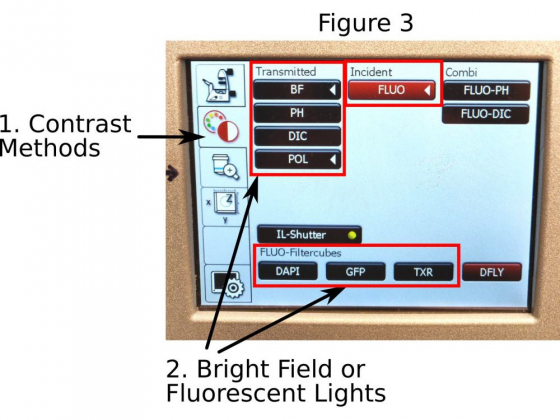 A Leica SmartMove is connected to the microscope for focusing as well. The ‘coarse’ or ‘fine’ modes can also be activated by buttons on the Leica SmartMove (2 in Figure 4). 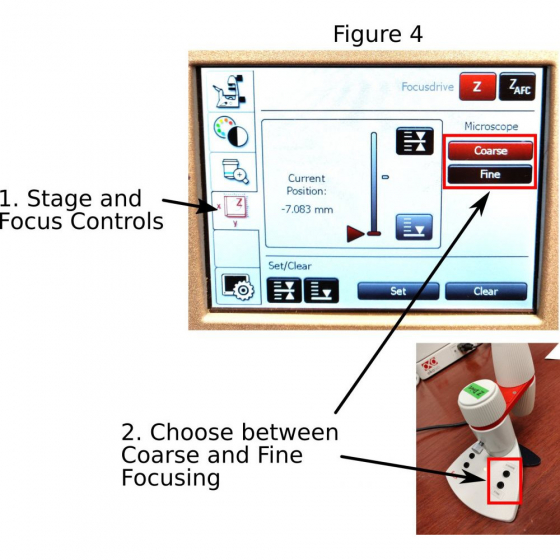 A.  Fusion saves an image (or serial of images in multidimensional acquisition modes) automatically. Therefore, you need first to set up a folder on the local hard drives (preferably) and a file name for your image. 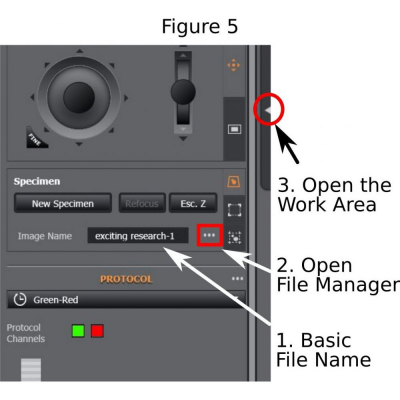 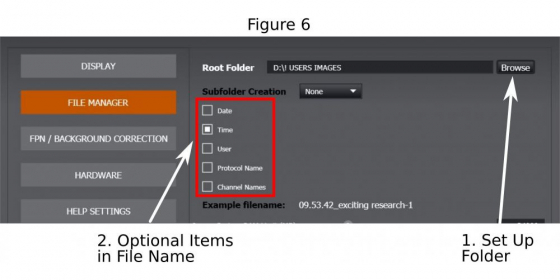 B.  Open the triangle on the right side of Fusion window (3 of Figure 5) to expand the work area.

‘Channel Manager’ tab is displayed. However, users are not recommended to make changes in here before they know how the system works. Changes on many items in ‘Channel Manager’ will be remembered by the system and are carried on to future experiments. LMCF provides a basic channel setup included in the 'Fusion User Data' for users to start with.

(3)   Select channels from the preset channel pool and add them to the protocol (3 in Figure 7). It is suggested that the same camera is used for channels in one protocol. 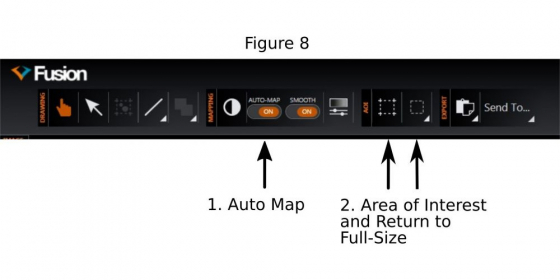 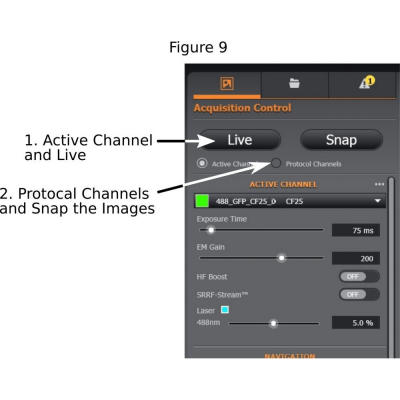 Never set up those exposure parameters based on the display of the images; Rather, you need to read the fluorescent intensities from the structure of interest and from the background by hovering the cursor over them. In general, at least 3 times (the higher the better) difference in intensity between them is desired for publication quality images.

In the Camera section in Channel Manager, the cameras can be set to take multiple images ('Frame Averaging') and the images are averaged to generate a 'cleaner' image; For the iXon EMCCD camera, 'Symmetrical Binning' can increase the camera sensitivity and image contrast, but at the cost of lower resolution of the images.

(a) Time interval: The time between the starts of two consecutive acquisitions; For single point acquisition, it is ‘1’.

(b) Total time points or total time period of experiment: These two parameters are linked to each other. Changing one also changes the other.

(3)  Multi-Field Positions: That is to add multiple imaging positions in the sample. In a time-lapse acquisition, those positions will be re-visited at each time point. Adding (‘+’) a position in the list allows the system to memorize its coordinates and focus (x,y,z), as well as the autofocus offsets. The saved positions can be deleted, refreshed, or re-ordered. 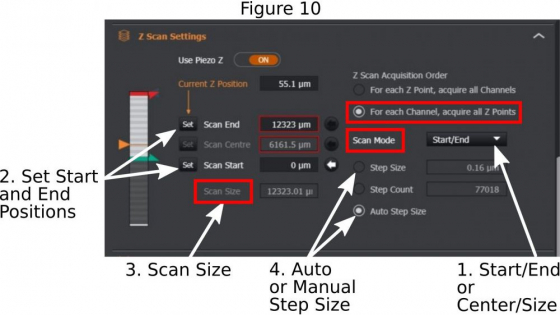 (b)  Step size: Choose  ‘Auto Step Size’  (4 in Figure 10) if the future z-stacks will be used for 3-D reconstruction or deconvolution; But if you plan to do maximum intensity projection of the z-stacks, a step size that is about 4x-6x of the ‘Auto Step Size’ may be entered.

(c)  For fixed samples, it is better to choose ‘For each Channel, acquire all Z points’

(5)   Montage: This is a tile-scanning and image-stitching procedure. There are two ways to set up the scanning area (the future area will be a rectangle in either way): 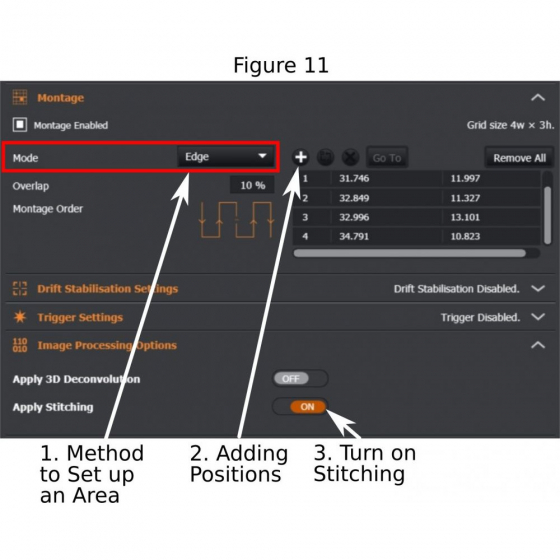 (c) In ‘Image Procession Options’, tick ‘Apply Stitching’ (3 in Figure 11); A single image of stitched tiles will be produced after the tile-scanning is completed.

(d) It is known that the illumination in the field is not uniform, especially it is weaker near the borders. To mitigate the artifacts (mainly visible ‘seams’ between fused tiles in the final stitched image), the central area of the camera chip may be cropped (2 in Figure 8) and used for 'Montage'.

D.   Acquired images in Fusion may be opened in Imaris, ImageJ, or Fiji for further processing.

1.  Use the 63x oil or 100x oil objective to achieve the best resolution

2.  Set up a protocol that uses the iXon EMCCD camera

3.  Set image acquisition at 2x magnification for the EMCCD camera

5.  Use a short exposure time (for example less than 50 ms). Loss in fluorescent intensity due to the short exposure time can be compensated by increasing the laser power. But make sure the structure of interest is not oversaturated. As a matter of fact, relatively lower fluorescent intensity generates better SRRF images with less artifacts in Fusion.

6.  Turn on ‘SRRF-Stream’ (in Channel Manager and under 'iXon EMCCD camera')

To Finish up Your Imaging Session

B.   Check the online booking calendar and

1.  If next user comes to use the microscope in one hour, close Fusion, and leave the system on;